A Saskatoon man has been convicted of setting up a fake GoFundMe account for the Humboldt Broncos after the junior hockey team’s bus crashed.

A provincial court judge found Andrij Olesiuk guilty of fraud under $5,000 and possession of stolen property obtained by crime. 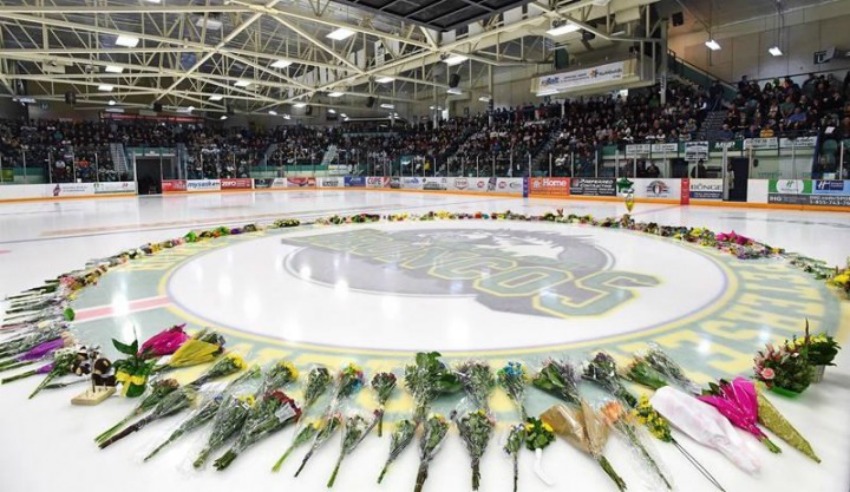 Court heard that Olesiuk raised $3,600 after the crash, but the money never made it to the Broncos.

Instead, it went to Olesiuk’s personal bank account and he spent it.

The crash at a rural Saskatchewan intersection in April 2018 killed 16 people and injured 13.

A semi truck driver carrying a load of peat moss missed a stop sign and drove into the path of the bus.

“It was an important (case) to prosecute in terms of taking advantage of a horrible tragedy, probably the worst tragedy in Saskatchewan’s history, to benefit yourself from those monies,” Crown prosecutor Darren Howarth said outside court Friday.

“And, of course, Mr. Olesiuk’s statement, his story, is just unbelievable for a large number of reasons. In that respect, I think it was the right decision.”

During his trial, Olesiuk testified that he closed down his account and gave $4,100 in cash to a woman who came by his house collecting money for the Broncos. He also said he lost the receipt for the donation in a house fire.

Howarth noted Olesiuk could remember specific details about the woman he gave the money to, but not the organization she represented.

He also said it didn’t make much sense for someone who seemingly had financial difficulties to have more than $4,000 in cash lying around.

“A lot of Mr. Olesiuk’s stories were just million-to-one unbelievable coincidences. You throw a bunch of those together and it really just becomes impossible to believe,” said Howarth.

Howarth wants the case to send the message that people can be criminally charged if they raise money for GoFundMe and keep it for themselves.

A legitimate GoFundMe for the Broncos raised more than $15 million.